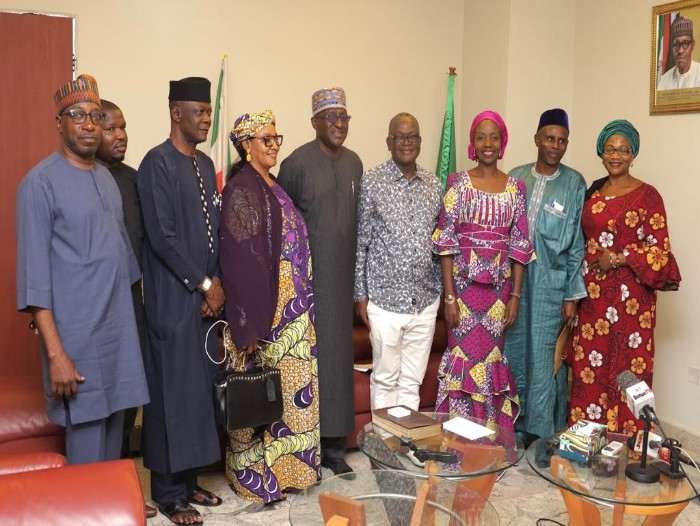 Benue State Governor Samuel Ortom has admonished Nigerians, particularly those in leadership to brace up for the task of rebuilding the country in line with the vision of the founding fathers.

The Governor gave the charge Monday August 1st, 2022 at Benue State Governor’s Lodge, Asokoro, Abuja when he received a delegation from the Solomon Lar Foundation on a courtesy visit.

The Governor lamented that Nigeria was today instead of being the giant of Africa was at the bottom looking up to smaller countries because the leaders had deviated from the standards set by the founding fathers.

He noted that leaders who came after the likes of Solomon Lar and JS Tarka failed to take advantage of the opportunities in agriculture, solid minerals, culture and tourism as well as the population to grow Nigeria to an enviable height.

Governor Ortom described Solomon Lar as a key figure in Nigeria’s political history, stressing that as a beneficiary of his political structure, he would personally avail himself at the event being planned to honour the founding father.

Chairman of the Solomon Lar Foundation and Former Director General of National Orientation Agency, NOA, Dr. Mike Omeri said the visit was to intimate Governor Ortom of their plans to honour Solomon Lar for his contributions to the enthronement of democracy and emancipation of the people.

Dr. Omeri stated that part of the activities lined up at an event slated to hold in October this year to honour the late Solomon Lar include the launch of a book the late nationalist personally wrote to explain a number of things which he and others did to grow Nigeria.

He said the Foundation also intends to establish an Institute of Good Governance, Democracy and Diplomacy to mentor the upcoming generations and help the people in jettisoning mundane issues in selecting leaders.

The former NOA helmsman commended Governor Ortom for utilizing the little resources at his disposal to deliver on the promises he made to Benue people and urged him to provide guidance for his successor so that the standards he has set would be sustained.