ADESHEWA OGUNDE: THE QUEEN OF THE THEATRE 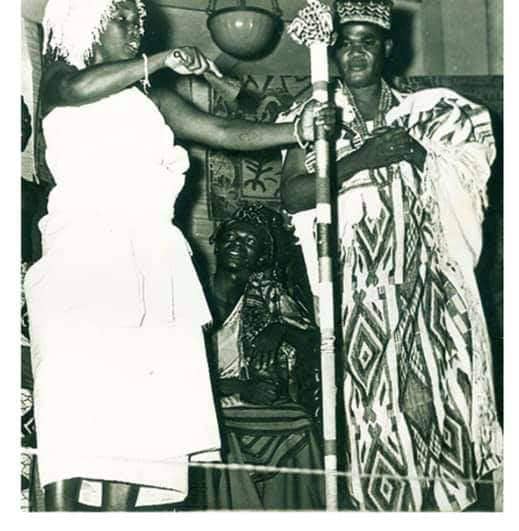 .Adeshewa was the lioness behind the throne a natural beauty of a woman. Light complexion with fine hips that Ogunde often admired on stage

She played the Saxophone and at the end of plays like Eda : Oh Ogunde and Yoruba Ronu , she and Ogunde on Trumpet would engage in a instrumental duet/ medley to the admiration of the Audience

She was the stage and set manager always travelling with the troupe while Ogunde would arrive for production later.

Noted for her white apparel what she used as a costume later became part her dressing symbol. Adeshewa had a lovely voice and was the livewire of the Ogunde Theatre Group.

It was on such a journey that Adeshewa embarked on , sitting in the front seat with 2 others , that she met her untimely end in a lorry accident near Ogijo in Ikorodu Lagos State .

Her death shook the whole entertainment industry and indeed it affected Ogunde himself as he couldn’t find such zeal, dedication and discipline that Adeshewa displayed in managing the organisation so most of the shows attendance fell drastically and his venture into film making did not go too well partly because of the vacuum left behind by this beautiful angel.

Listen to the recorded music and feel the pain and the emotional stress Ogunde went through in her record .

Her death was then filled with wild speculations. Some painted mysterious and spiritual reasons for her death. Ogunde had just released blockbuster plays Aiye and Jaiyesinmi, both filled with voodoo and witchcraft.

It got so bad that people insinuated that the second wife who constantly played the role of the witch or bad lady in most of Ogunde’s plays was carelessly blamed for her death.

May 28, 2022 thelagosianmagazineng
Arts and Culture News

EKWERENMADU: The Lagosian Has Evidence That The Senator Informed the British of His Plans