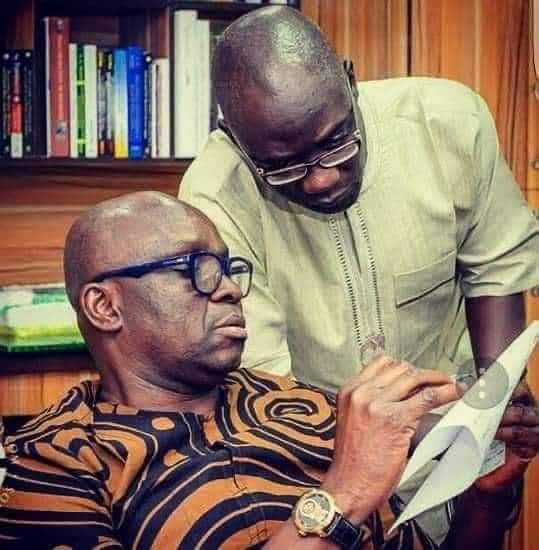 Former Governor Ayodele Fayose has written a public reply to his former Deputy, Prof. Kolapo Olusola Eleka, counseling him “not to forget history that soon”.

Recall that Professor Eleka, in a recent publication and as a fallout of the Ekiti PDP primaries that seemed not to favour him, had thrown shades at his erstwhile mentor for perceived betrayal.

In response, Fayose has written a public response and we invite you to peruse the contents of the letter that is vintage Fayose below.

My Dear Brother and Follower,

RE: NOTIFICATION OF WITHDRAWAL FROM SENATORIAL CONTEST; I WASN’T DECEITFUL AND ARROGANT IN 2014 AND 2018 WHEN I CHOOSE YOU AS DEPUTY, GUBER CANDIDATE

I read your outburst in your letter to the National Chairman of our party, the PDP, Senator Iyorchia Ayu, on the withdrawal of your Senatorial aspiration for Ekiti South.

As my former Deputy and follower, a self-professed “Aremo Osoko,” even though I feel strongly that I should not join issues with you, it is important to set the records straight, especially on your use of words like deceitful and arrogant in addressing my person, which is highly regrettable.

Most importantly, as a political follower and a Professor of repute, I feel you should not forget history that soon, by allowing yourself to be taken over by emotions such that you will speak ill of a man you once called your “greatest political leader.”

Have you forgotten that you were in the classroom when I brought you to be my deputy in 2014 without being part of my emergence as PDP candidate? This is aside the fact that you were unknown to anyone in the party then.

Then, I was not deceitful and arrogant, but the best if I may quote you rightly.

Recall it was condition precedent that we will leave office together in 2018. Rather than leaving with you, I endorsed you as PDP Governorship candidate and by the grace of God, you emerged the candidate against all odds and interests. I became the enemy of those who were opposed to your emergence as candidate without being tagged as deceitful and arrogant.

I also worked tirelessly for your election as governor, and you know that you are not the governor of Ekiti State today, not because we lost the election.

Then, I was to you, the greatest among leaders.

Unfortunately in 2022, for reasons known to you, you missed the privilege of being endorsed as I did in 2018, part of what earned me your new title of deceitful and arrogant.

I have become a man you openly disparage, forgetting that everyday is not Christmas.

However, I consider this as prize for leadership. Nonetheless, all necessary lessons learnt.

Interestingly, the public you intend to get their sympathy against me are no fools. They certainly have a sense of history.

Eleka, as I always call you, I think it is time you do a soul searching and ask yourself what went wrong.

Finally, let me state that my love for you goes beyond political followership and my doors shall remain open for you always. I wish you well.

Nigerians await the outcome of this emerging frosting relationship between a political mentor and his erstwhile mentee.