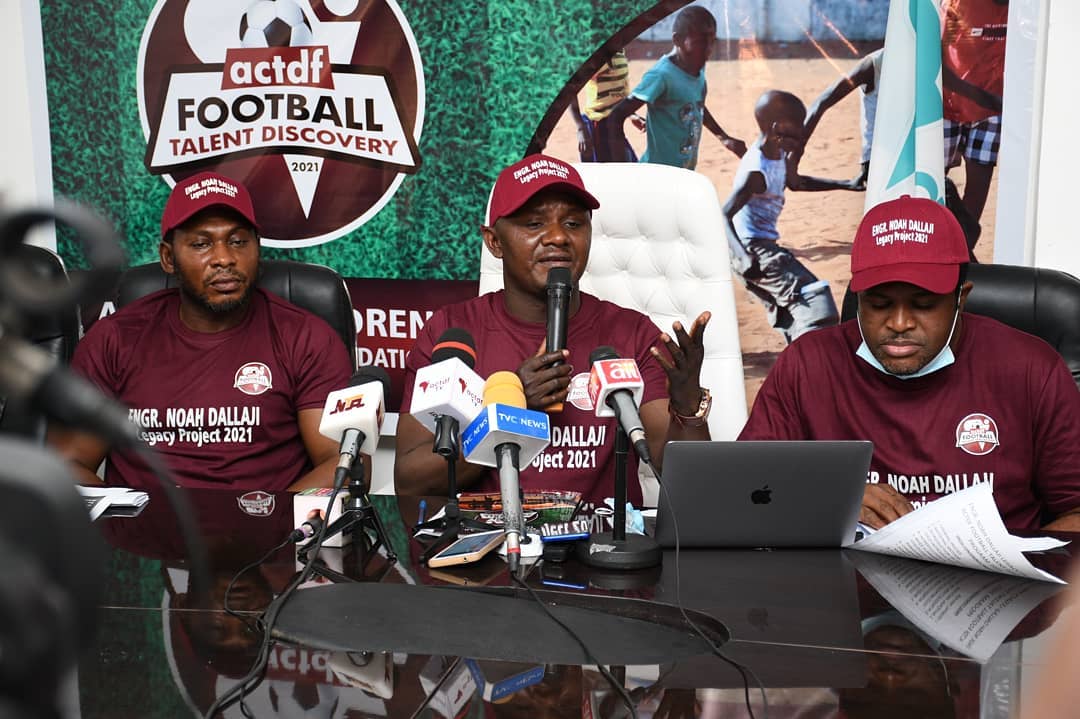 Youths across Nigeria are in great anticipation as the countdown to the second edition of the African Children Talent Discovery Foundation’s (ACTDF) talent hunt and mentoring programme begins. The event which takes place  between 26th and 27th in Bauchi, Bauchi State is already a huge talk of the town in Nigeria and our investigation indicates that talented youngsters are in for the opportunity of their lives.

Tagged Engr. Noah Dallaji Legacy Project, the talent hunt covers football, music, entertainment and the arts in general. However, this year’s edition would feature football where young talents between ages 16 and 18 would be discovered and mentored by big names who are legends in Nigeria’s soccer history.

At a press conference in Abuja recently where preparations and modalities for the event were unveiled, Chairman of the foundation, Engr. Noah Dallaji, said the programme was in furtherance of ACTDF’s vision and mission to discover and develop Nigerian talents to solve some of the challenges of insecurity, social ills and consequently development of the country.

He harped on the need to develop the youths by enabling them to discover their talents and thus become useful to themselves, their families and the nation at large.

According to him, it is important to develop the natural talent (God given ability) in order to maximize opportunities for a purposeful life.

He stated: “So this is what we have been doing to see how we can fill the gap of opportunities for the young ones in the country to make impact and be useful to themselves, their communities and the society at large.

“Every man has something in him that can be activated and be useful in life. Believe me, no one has that ability except you but this has to first be discovered and developed and truly nurtured.

ACTDF founder and officials including Amokachi, Babayaro and Tijani Babangida

“Every man born of woman, nature, has never given birth to failure. I believe we did not come to this world to be spectators rather we have come to participate in the affairs of the world. So you must try and discover why you came into this world. And immediately that happens, we begin to be useful not only to ourselves but for the greater good of society”.

Dallaji said the Legacy project would continue to progress as an annual event, noting that this year’s edition was initially planned to incorporate such soccer greats like Ronaldo de Lima, David Beckham and Jose Mourinho but was affected by the Covid-19 restrictions while assuring that the next edition would be bigger in size including caliber of soccer legends who will participate.

He assured that arrangements were being made to ensure a water tight security for a hitch-free event.

Project Coordinator, Emmanuel Babayaro, who also spoke on the preparations, said the event proper would be preceded by an open selection process where the selected talents would be camped and mentored by the likes of Daniel Amokachi, Jay Jay Okocha, Kanu Nwankwo, Austin Eguavoen and others including El Hadji Diouf of Senegal and Stephen Appiah of Ghana.

He said that the mentoring would be both in classroom and on the pitch, playing side by side with the legends, leading to selection of those who are really talented and boosting their morale.

“Then those who are finally selected will play on the pitch where their mentors will also serve as their coaches before a novelty match between the Friends of Dallaji and Bauchi All Stars”, he stated.

Babayaro further explained that the finalists would be taken to the ACTDF Academy in Abuja where they will be trained before exposing them to foreign trials.

Both Chairman of the Planning Committee, Daniel Amokachi and ACTDF Ambassador, Tijani Babangida, also expressed their support to the project, which they said was in the right direction to help the youths develop their talents and be fulfilled in life.

THE STORY OF FERDINAND, A YOUNG CHESS PLAYER FROM MAKOKO