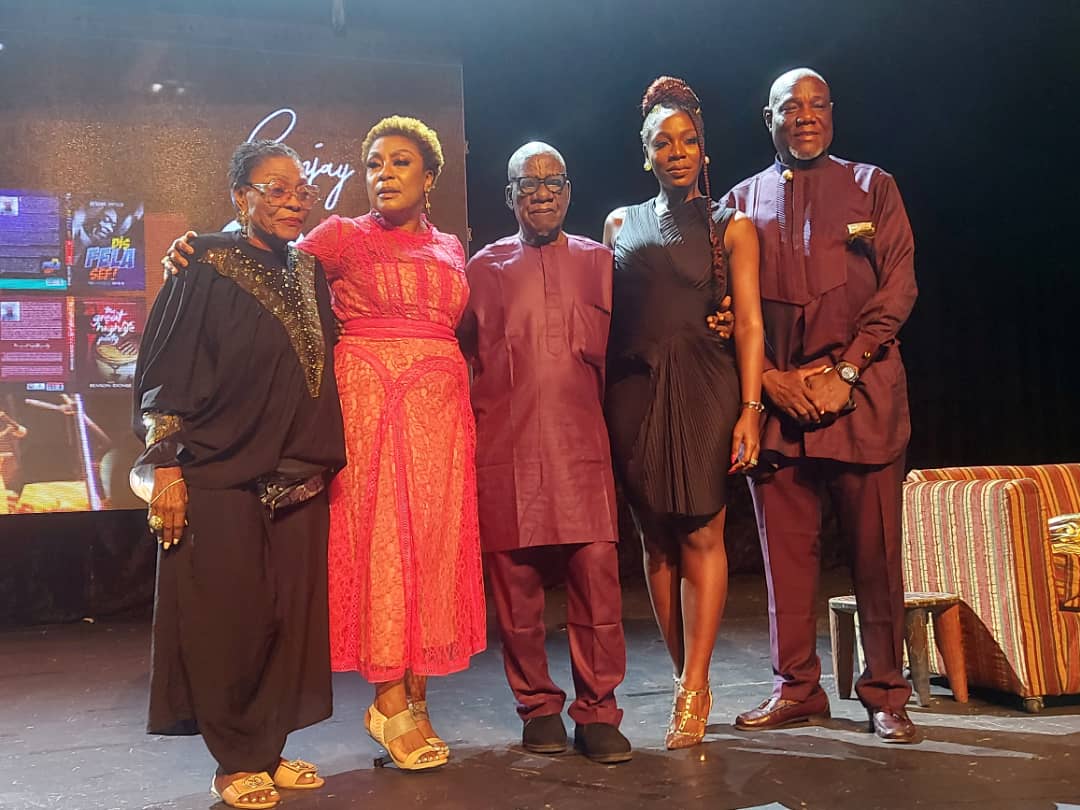 The day, June 13, 2021, will go in the books of history as yet a day of momentous jubilation; of accolades and tributes; of laughter and fun; of good music and rich poetry; dancing and paparazzi – above, a moment to exchanges of collective affection in honor of the incredible Benson Idonije who turned 85 years.
It was Sunday, the end of the weekend break generally acknowledged as a “ day of rest”. There were no excuses as to why the show must not go on.

Burna Boy with his Grandparents

In paying due honor to the living legend, Committee for Relevant Arts – an arts advocacy group celebrated a man by whose hands the musical industry has grown in leaps and bounds, from the humble days of the Nigerian music industry to a stage of global prominence. The man who helped set up and managed Fela Anikulapo’s first band called Fela Ransome-Kuti and the Quintet. Idonije was instrumental to the consequent creative processes that birthed Koola Lobitos in 1963, Fela and Egypt 70 band, and Fela and Egypt 80. The duo of the Late Fela and Benson Idonije shared a kindred spirit, an outstretched show of musical fraternity that still binds both families to date.

As part of the line-up for the D-Day, there were poetry performances by Segun Adefila, a widely traveled Theatre maker titled Persin wan kiss and Letter to Corona interludes with a Yoruba folksong. This was followed by a solo music performance by music scholar and performer, Biodun Batik and sensational bodyphonist, Jojo body beat.

The event which was anchored by Jahman Anikulapo, Programme Chair for CORA was predicated on Literature, Music, and Performances which are the celebrant’s triad of relevance.

A short documentary which highlighted the Octogenarian’s journey over the decades with the title “Highnotes of a musical Odyssey”. This was followed by the celebrant’s giving vote of thanks in the company of his family.

There was a lot of food and drinks to take care of one’s belly needs as Dede Mabiaku and his band serenaded the audience with back-to-back Fela’s golden classic. The infusion of Gloria Ibru (Mama G) and Pa Lekan Animasahun (Baba Ani) further colored the last phase of performances. Not to forget, Burna Boy’s freestyle on the MIC gave a hint into why he deserves to be hailed as Twice as Nice for his 2021 Grammy award-winning album.

ANNUAL NATIONAL DIASPORA DAY CELEBRATIONS: ABIKE DABIRI CHARGES ON THE NEED TO CELEBRATE THE SUCCESSES OF PATRIOTS IN DIASPORA