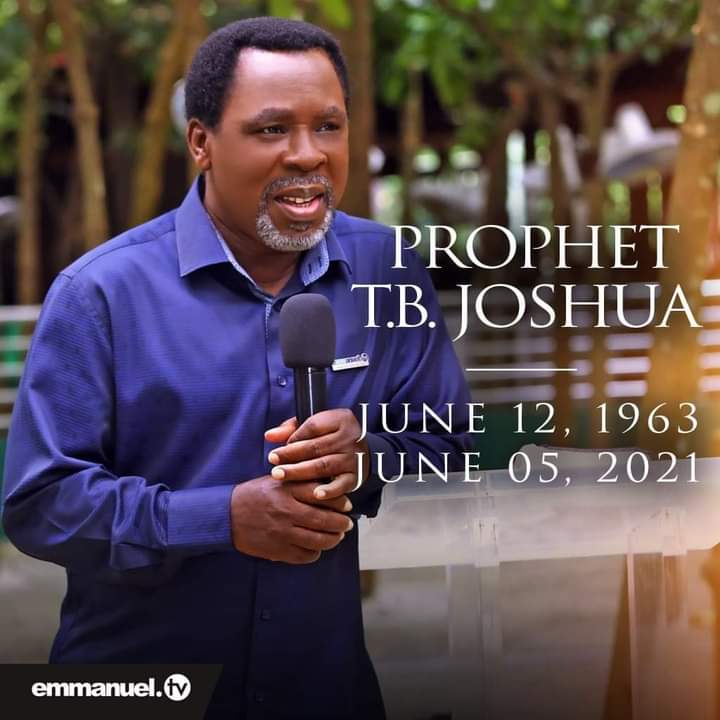 The sudden demise of famous Nigerian Televangelist, Prophet, and Philanthropist par excellence, Temitope Balogun Joshua popularly known as Prophet TB Joshua sent tremors of a rude shock, apprehension, fears, and an outpouring of emotion associated with the passing of such a colossus. The respected Man of God didn’t show any sign of frailties or suffered any medical crisis – a reason why the news of his death went viral the very minutes, the headline news read: ‘’TB Joshua is dead’’.

As at the time of his death, the Late TB Joshua was about approaching age 58, two years before his Diamond Jubilee Birthday celebration. But he lived far beyond his years – as his tentacles of Evangelism and Humanitarian outreaches echo around the world. A native of Arigidi in the Akoko area of Ondo State in Nigeria, he, like the biblical Joshua was indeed the personification of the name, Joshua meaning: Jehovah Saves. Indeed, the Late TB Joshua worked tirelessly and earnestly for the propagation of the gospel – undoubtedly sold out to the reason why he was born.

Like the biblical chronological order of the Hebrew leaders: Moses and Joshua – the story of Moses Orimolade Tunolase, the founder of the Cherubim and Seraphim Church worldwide who was born in the year 1879 in Okorun Ikare Akoko Ondo State of Nigeria and that of TB Joshua (both prophets of the Highest) – and who both hail from Ondo state and had strange childhood encounters – later to become a global phenomenon for Christ, speaks volume of divine grace and encounter.

At the instance of such demoralizing news, the floodgate of the internet practically broke – and the bandwidth of eager internet users – reached a crescendo of merited anxieties – questions begging for questions – answers resolutely in the fact that the lovable cleric was no more. Expectedly, there were insinuations of rumored death while the league of conspiracy theorists spewed their alabaster box of ‘’biased, lopsided and baseless’’ connexion to the circumstantial death of this great man of God. But then, the great TB Joshua can no longer answer back – he has transitioned from the mortal plane.

What is left is not to cry all day and brood all nights long, says a bystander who watched as the hapless congregants of the Synagogue Church of All Nations (SCOAN) founded by the Late TB Joshua – littered the premises of the mammoth edifice. His death no doubt is a rude shock as even President Buhari extolled the virtues of the Christian leader and admonished the followers to accept this inconsolable loss in good fate – in a statement signed by Mr. Femi Adesina, the President’s Spokesperson. Of a truth, death is not the greatest tragedy – the worst tragedy is what dies in a man while he yet lives. TB Joshua lived life, live out purpose and destiny – above all, he lived for the commonest of men. He was a man of the people.

In a statement by renowned Lagos Journalist and Publisher of the Lagosian Magazine, Mr. Sola Ojewusi noted: ‘Prophet TB Joshua was a father figure to me: ‘’His words of advice are cherished, ever-listening, caring and a bigtime supporter of our brand. He was magnanimous to a fault – offering help even when you didn’t expect it. I will sorely miss him’’. The same was echoed by Governor of TB Joshua’s home state – Ondo State – Mr. Rotimi Akeredolu who in a statement by his Chief Press Secretary, Olatunde Richard, wrote: “Undoubtedly, Pastor Joshua’s demise came as a rude shock. The pains are not mere emotional flashes; they are indeed piercing. The Ondo-born Pastor and televangelist was committed to giving and was more often, inexorably imbued with calmness while lifting the downtrodden. As a televangelist, he did not just win souls for Christ, he was passionate about changing lives.’’

Such was the extent of the impact of the Late TB Joshua on many lives across the world. The preacher was reputed to be one of the biggest donors of food palliatives and cash gifts to the less privileged within the Ejigbo-Ikotun area where his church is situated. He doles out food, relief materials, cash gifts, clothing, scholarship to as many without any consideration and expecting anything in return. Amongst his several humanitarian causes include: The SCOAN scholarship programme for students in the primary, secondary, and even tertiary institutions; sponsoring a Nigerian student on his Ph.D. programme in the United Kingdom in the year 2012; supply of aid materials to victims of the 2010 Haiti and April 2016 Ecuador earthquake with materials worth $500,000; restoring Nigerian returnees in the country and settling them appropriately. He was reported to have built schools and hospitals in both Haiti and Ecuador at the time of distress.

In a statement by Mr. Kunle Olowoopejo, the Executive Chairman, Egbe-Idimu Local Council Development Area (LCDA) in Lagos, TB Joshua was ‘’a complete definition of what humanity should be’’. He lent his hand of fellowship to all. Little wonder, he was awarded Officer of the Order of the Federal Republic (OFR) in 2008 – in acknowledging his patriotism. TB Joshua was equally handed a letter of appreciation from the United Nations; Israel’s primary rescue and recovery voluntary service gave him an ‘award of excellence; the Arewa Youth Forum, a Muslim organisation, recognized him as an Ambassador of Peace.

Finally, there would always be great people who live and die as a point of reference. It is an unfair comparison to draw a line of who is a better legend or not. However, it would be a brash contrivance of posterity not to acknowledge that TB Joshua by his lifetime works is fit – to be enrolled into the halls of the great pantheons of the Fathers of faith.