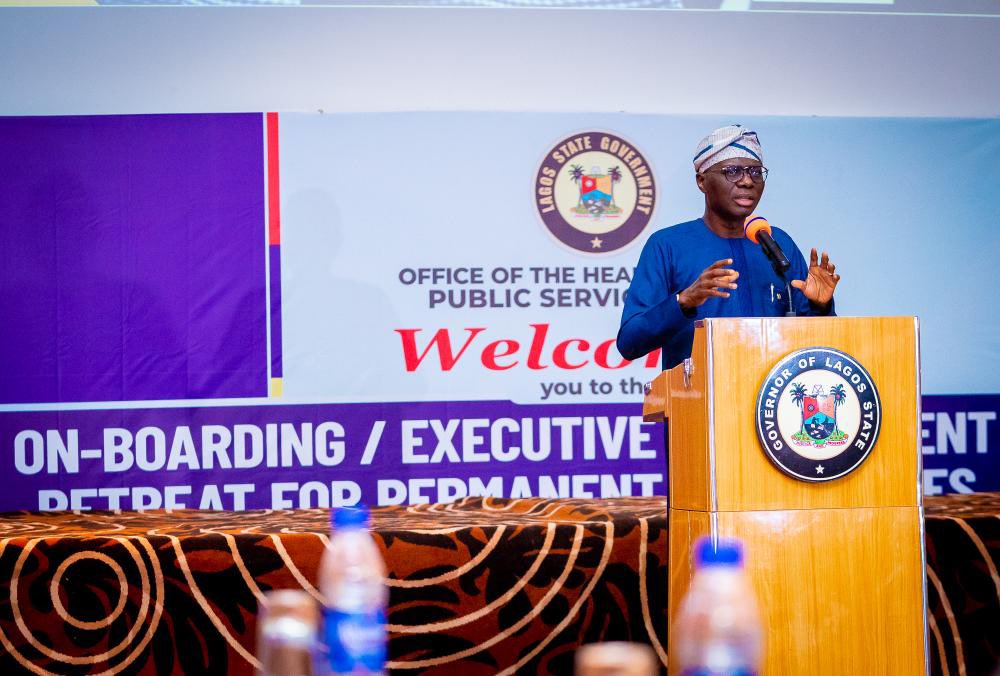 Lagos State Governor, Mr. Babajide Sanwo-Olu, has charged all Permanent Secretaries in the State’s civil service to bring their experience to bear in creating implementation framework and seamless coordination in the delivery of Government’s programmes and policies.

To achieve the administration’s set objectives, Sanwo-Olu said there must be efficient collaboration between Permanent Secretaries, who are experienced technocrats, and political heads assigned to their ministries to drive programmes’ implementation.

The Governor advised Permanent Secretaries in the State’s public service to leverage the positions to foster teamwork with cabinet members for improved impact of governance and development. Sanwo-Olu spoke, on Thursday, when he declared a two-day retreat organised for the Body of Permanent Secretaries open.

The event is being held at Lagos Continental Hotel, Victoria Island.

Sanwo-Olu said the outbreak of Coronavirus (COVID-19) pandemic had brought changes to traditional ways of doing work, charging all the 57 participants to adapt themselves to the new reality and think outside the box in order not to slow down wheel of governance.

He said: “Permanent Secretary is a position that comes with tough responsibilities, given the expectation from the political leadership and the citizenry. As experienced officers in the civil service, Permanent Secretaries must develop a framework for implementation of Government’s programmes and policies. This means creating viable relationships with the political heads of their ministries.

“Most of the cabinet members who are also professionals in their own right may not understand the rudiments of engagement in the public service. It is the duty of the Permanent Secretaries to put them through and streamline the activities of ministries in line with objectives of the Government. Therefore, collaboration between the cabinet members and civil service is necessary for better coordination.”

Sanwo-Olu told the participants to see their appointment in to the position as a privilege that must be embraced with humility, urging them not to be domineering in imposing their authority in their ministries.

He admonished them to accord respect to public officers in lower cadres and carry them along in the activities of the ministries.

He said: “The THEMES agenda is a tool being used by the Government to reposition Lagos for greater development. You are technocrats in the public service, who have what it takes to help drive the objectives successfully. I urge you to bring your experience and vigour into the work. If we see excellent results, you would only not only be my Permanent Secretaries, but also my friend in the journey to deliver Greater Lagos.”

Head of Service, Mr. Hakeem Muri-Okunola, said the retreat was an on-boarding process for newly appointed Permanent Secretaries to learn from their older colleagues and get them equipped with ideas that’ll help them run the affairs of their respective ministries efficiently.

Muri-Okunola hailed the Governor for approving the retreat, pledging the commitment of the civil service towards the achieving the administration’s development agenda.