YEMISI IGINLA SPEAKS: “FOR MY CHILDREN’S SAKE AND FOR THEIR DESTINY” | DETAILS ABOUT STELLA 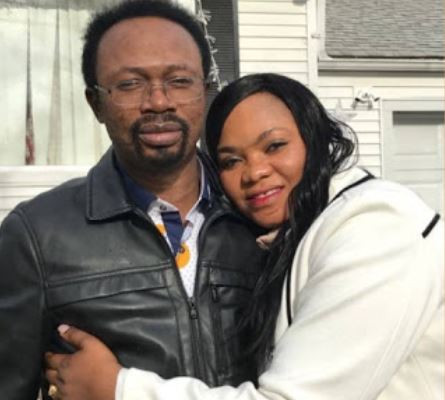 In the video, Yemisi Iginla says that the woman who gave birth to a child for her husband, known as, Prophetess Stella, told her to share her husband with her. After that, she got the number of the said woman and she says Stella began to “condemn” her everyday.

She said showed a screenshot of what appears to be Stella’s WhatsApp status. She read the contents of the status, “An AS and AS genotype can never be, thus a misplaced marriage”.

She also said her husband, Pastor Joshua Iginla, never told her about the relationship with Stella and she found out on her own about the child he had with Stella.

In the 3rd video, she showed a photograph of Stella when she was pregnant and then showed a photo of her husband. What we noticed in the blurry photos is that it appears both photos were taken with what appears to be the same brown leather chair. In the photo, a female is seen standing with arms akimbo in-front of the chair with a bulging stomach and a man in an orange top is seen sitting on the same couch.

In the 4th video, she debunks his claim that she cheated on him by challenging him to conduct the genotype of their three kids. She says they are all his. She goes on to say: “If he loves Stella, he would have told me he wants to go on with Stella, instead of tormenting my life, involving his family to torment me. Nobody knows the pain I went through.”.

In the 5th video, she says she asked him if Stella is “her wife”, she says “he should allow me accept that fact. I can stay with it. After all, I have known all the pains I have bear all the whole years. I now see that he cannot separate himself from Stella, th prophetess in South Africa.”

In the 6th video, she says she is making the video so that in the future her kids will not ask her why she didn’t speak out. She said, “My 3 children are his, i have never lived a promiscuous life. I gave my life to Christ since I was 6 years old and ever since, I’ve been in the faith.”

She ended by apologizing to people who had been sending messages asking why she couldn’t let the matter be settled in private. She said she’s doing it for “my children’s sake and for their destiny.”

She finished with, “My husband is Brother Joshua Iginla, if he says its the end of it, its not the end of life. God is with us all the time. God bless you all, have a blessed day, bye.

Iginla had allegedly bought a house worth $1 million (N360 million) to settle his wife. It was also gathered that the pastor had allegedly married his baby-mama in 2014. Evidence of Iginla’s marriage to Stella also surfaced on the internet.

His baby mama who is now his wife is said to be a wealthy South African lady whose name is Stella Zimasa Ndamase Iginla Close sources said the lady is so wealthy that she does not know what to do with money.

According to The Sun, the woman who is a South African prophetess, Stella Zimasa Ndamase, has a child named Rhema for the pastor. Ndamase is also reported to be pregnant with a second child.

Watch Stella preach in the video below