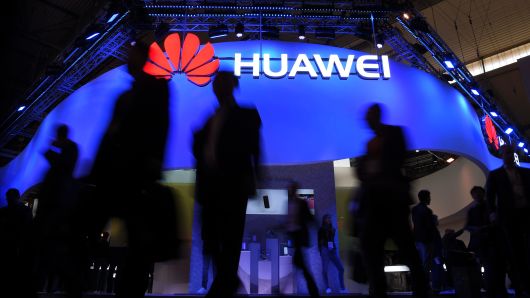 Chinese tech giant Huawei is facing a new attack as it tries to persuade the UK government to let it help build super-fast 5G networks in the country.Top British cybersecurity officials are reportedly confident they can manage any risks from Huawei’s telecommunications equipment, but a report published Wednesday by the Royal United Services Institute (RUSI), a top security think tank, said that would be a mistake.

“Allowing Huawei’s participation is at best naive, at worst irresponsible,” the report said, suggesting such a move could compromise the United Kingdom’s communications infrastructure.

The US government is pushing allies around the world to block wireless operators from buying Huawei gear for the 5G networks they’re starting to build. US officials say the company’s technology could be used by Chinese intelligence agencies for spying. Huawei and the Chinese government have repeatedly denied the US allegations. Huawei didn’t immediately respond to a request for comment Wednesday.

The report’s release comes days after theÂ Financial Times reportedÂ that the UK’s National Cyber Security Centre had concluded the risks of using Huawei equipment in 5G networks could be managed.The UK government, a key US ally on intelligence and security, isÂ expected to decide this spring which suppliers can provide technology for 5G networks. If it chooses to allow the use of Huawei gear, it could seriously undermine the US campaign against the company and influence other governments that are weighing how to handle the issue. The UK Department of Culture, Media and Sport said in a statement earlier this week that it was “looking at a range of options” and that “no decisions have been taken.”

The RUSI report â€” written by former diplomat Charles Parton, who spent 22 years working in mainland China, Hong Kong and Taiwan â€” warned that the UK government needed to stay alert for interference from the Chinese government across a range of fronts, including politics and research.Britain is a particularly appealing target for interference as a close US ally with a large Chinese ethnic community and an open, advanced economy, Parton said.

“Beijing’s interference is not aimed at subverting the West, but represents a rigorous, ruthless advancement of China’s interests and values at the expense of those of the West,” he wrote.

Australia and New Zealand have already blocked mobile carriers from using equipment from Huawei, the world’s biggest maker of telecommunications equipment, over security concerns.The United States has made it clear that any country that uses Huawei will find its opportunities to work with Washington limited. In a speech in Munich on Saturday, Vice President Mike Pence described the company as a “threat.”

“Chinese law requires them to provide Beijing’s vast security apparatus with access to any data that touches their networks or equipment,” Pence said. The RUSI report reached a similar conclusion, saying that although Huawei may be a private company, China’s national security laws required cooperation with authorities when requested. “Huawei’s Chinese staff have no choice but to accede to requests from Chinese government departments,” the report said.The Chinese government has denied it would demand access to Huawei’s technology for spying, and the company has said it would refuse such a request.

If the UK government approves the use of Huawei technology in 5G networks, close allies might be less inclined to work with it in the future, the RUSI report warned.

Britain is part of the intelligence-sharing group known as Five Eyes, which also includes the United States,Australia, Canada and New Zealand. “The maintenance of a ‘Five Eyes standard’ of cyber security in telecommunications is a vital strategic and security interest, the loss of which would go far beyond a reduction in intelligence reports exchanged and might lead to the UK being excluded from work on developing future technologies for intelligence collection,” the report said. It also advised devoting more resources to protecting British universities, where technology of interest to Beijing may be under development.

“Ultimately, the United Kingdom’s goal must be genuine reciprocity and an equal, mature and comprehensive relationship with China,” the report said.