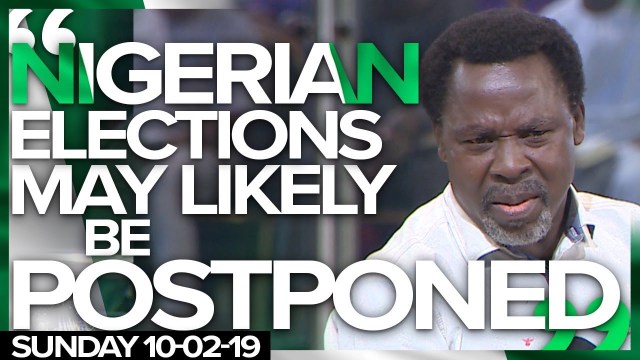 The announcement by INEC late in the early hours of Saturday that Nigeriaâ€™s presidential and parliamentary elections have been postponed sent ripples of shock and anger across the country, but the founder and leader of the Synagogue Church of All Nations, Prophet T.B. Joshua actually predicted the postponement last week.

In a widely circulated statement dated Sunday, 10th February 2019, T.B. Joshua wrote, â€œThe Nigerian election may likely be postponed because of many challenges. In whatever way, God is in control.â€Â

The prediction eventually came true when hours to the vote, Mahmood Yakubu, the INEC Chairman, announced the postponement, citing logistical challenges and declaring that â€œProceeding with the election as scheduled is no longer feasible.â€

The announcement has left Nigerians confused and angry, as voters had made arrangements to ensure they exercise their franchise. The two main political parties, the ruling All Progressives Congress (APC) and the Peopleâ€™s Democratic Party (PDP), condemned the move and accused each other of trying to manipulate the vote.

As a fall out of this, our correspondent interviewed some Nigerians and reports that not a few are marvelled by the accuracy of the TB Joshua prophesy.